Hi everyone. I hope you are having a great day. I know that I am. I am inside the house with the goatlady on this rainy day and  today is my turn to tell you a little about me. I came to the ranch from Rainer, Oregon.  I am an Australian Shepherd, raised and trained to herd. 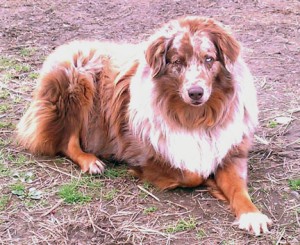 The next morning we went back to Elsie’s house and she spent some time with me herding goats. Seemed simple enough. We were in a field. The goats could not get out.  She had gates all around just like I was used to. Elsie knew the commands and she was nice. Then it was the goatlady’s turn.  That was funny.  I had a hard time not laughing at her, and I really didn’t want to mind her. Elsie informed me of my bad manners, and that was not acceptable!  She also let me know that if I was going to live here I must learn to do the job I was being brought in for.  I listened to her advice.  And  so my new life started.

I have now been here a year and I love it.  There have been many lessons for both of us, but I could not ask for a better place.  I have learned that herding for competitions is much different then herding on a working ranch.  I work in places that don’t always have fences.  Sometimes, when I am asked to go get the goats they are down in  little ravines where I can’t see them right away.  Or worse yet, they may be inside thickets of blackberry bushes where it hurts to go in and get them.  But, all in all, it is fun.  A year later, the goatlady and I have figured out how to communicate with each other when herding.  She now knows the commands (although she still gets them mixed up.)  My life here is good.  The goats still do not like me, they stomp and make noises at me, but I don’t really care. They have to listen to me when I am asked to do something with them, or else the goatlady gets after them.  I live here and this is where I am going to stay for the rest of my life.  What a great home!  I will be back to tell you more of my side of things around here later.